Back to Blog
Dec 23
By Powertec Solar 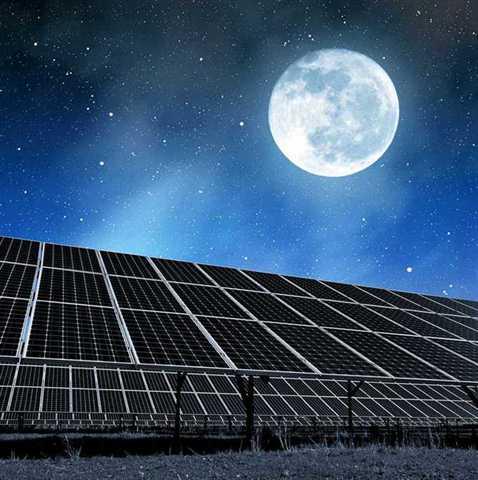 Whether you want to watch late night news, turn on the reading lamp by your bedside, or stay up until the wee hours playing video games, you need power. A common concern from would-be solar adopters is: “Hey, when the sun’s not shining, how am I supposed to produce power?”.

Now, we don’t want to bury the lede here, so let’s be clear upfront: yes, solar energy can be stored and used at night. The more interesting question is whether or not you should store solar energy: to answer that, we’ll need to compare batteries and public utilities.

As your panels collect solar energy, it gets used by your household – your appliances, your lighting, whatever’s running. Some of that energy does not get used, however, especially when you’re not at home and it’s summertime.

That excess energy can go one of two places – the first is to a solar battery. Now, not every solar setup is going to have a solar battery (more on that in the next section), but those that do can have batteries of varying capacity. One common type of battery can store up to 10 kWh of power. A household might use ~30 kWh in a day (though this can vary considerably – electric furnace owners, for example, may use a lot more in the winter). If your battery’s capacity is around ⅓ of your home’s energy usage, your stored solar energy should last around 8 hours.

Now, this number isn’t exactly right, because solar batteries have what’s known as depth of discharge (DoD). We won’t get too deep (pun intended) into the details – read the linked article if you want to know more – but basically, batteries should generally only use something like 80-90% of their capacity before they need to start recharging. That means your 10 kWh battery may actually only be usable for about 8-9 kWh.

Batteries seem pretty decent, if not perfect, for our solution to the “solar at night” problem. So why don’t more people have them?

Because there’s a better way!

Most solar panels are “grid-tied”, meaning they’re connected to the electric grid provided by power utilities. Many of these utilities offer what’s known as “net metering”. The way it works is simple: excess electricity is poured back into the grid, instead of into a battery, and your utility credits you for every kWh of power provided. Then, at night, when your solar panels stop producing power, the utility starts sending you electricity – but you don’t have to pay for any amounts lower or equal to the amount you already sent to them.

In many ways, this is a much more efficient (though a much more metaphorical) battery. The amount of kWh you can “store” is pegged at the amount of energy your utility can provide to you – and we can pretty much guarantee it’s a lot more than 10 kWh. Grid-tie is also much better in the wintertime.

When should batteries still be used?

Though grid-tie + net metering is the go-to for solar arrays that have access to them, there are a few circumstances in which batteries are preferable. They include:

So yes, solar energy can be stored – in more ways than one – for nighttime, wintertime, rainy time, or any other not-so-sunny time usage. Looking for solar panels in Winnipeg? Get in touch with us.