Get a Free Solar Energy Feasibility Analysis of Your Property

We supply and install a wide range of solar solutions for all types of applications.

Ontario offers a net metering program meaning you can use the grid as storage for excess power and use the power when it’s needed.

Due to recent innovations in solar technology, solar power is now an economical and environmentally friendly option for Kenora and Lake of the Woods residents and cottage dwellers.

Let us help you size your system to get the quickest return on investment possible.

Homeowners across Canada are adding solar electric modules to their roofs in order to reduce their environmental footprint and save money on their utility bills.  Many homes produce 20% – 50% of their annual power needs through rooftop solar systems.  This is a green alternative even to hydro-electric which (although cleaner than coal) is devastating to many ecosystems.  Solar electric prices have fallen significantly over the last five years, making this an economically viable solution for home and cottage owners in Kenora, Lake of the Woods and North Western Ontario. 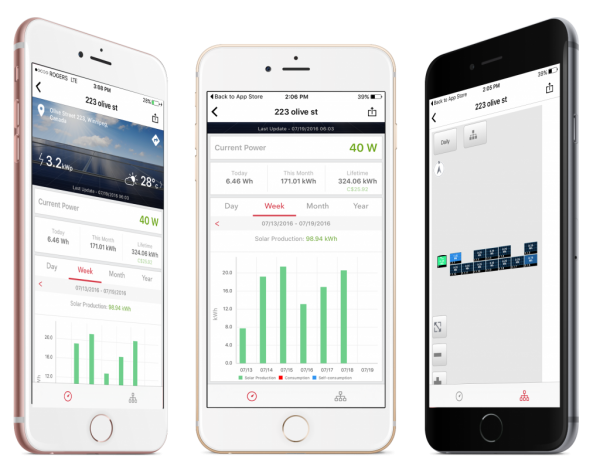 We provide you with a mobile app to track your power production 24 hours/day 7 days/week. Not only that, we will monitor your panels production as well, and if anything isn’t performing properly we’ll schedule a time to come over and get things working how they should be.

Solar power is big business in Canada; Natural Resources Canada estimates that $6.6 billion dollars were spent on new solar projects between 2012-2016. Almost all of that spending took place in Ontario; 2.3% of Ontario’s electricity demand was met by solar power in 2016, as compared to the national average of 0.5%. Residents of Kenora have a keen understanding of the impacts of pollutants and global warming; Kenora is surrounded by some of the most pristine lakes and forests on the planet, all of which are susceptible to the effects of climate change.

Ontario has the highest hydro costs in all of Canada; a report by the Fraser Institute showed that residential hydro costs in the province rose 71% from 2008 to 2016; from 2008 to 2015, this was almost four times the rate of inflation. Statistics Canada reports that in 2011, the average household in Ontario used about 30 Gigajoules of energy a year;  this translates to about 8333 kWh of electricity use per year per household. Using mid peak consumption rates as an average, this translates to a cost of about 783$ per year, but as we all know, it’s often peak time hours that are being billed, so monthly bills of over 150$ are not at all unheard of.

This creates a real problem for the citizens of Kenora; ballooning energy costs are untenable, no one wants to pay close to or more than 1000$ a year just for hydro, and sustaining the environment is a big concern when you love the outdoors. Combating these two daunting issues seems difficult, but there is a solution: increased usage of residential and commercial solar power.

The Ontario Energy Board has mandated that utilities offer a net metering program to all residents who install solar panels in Ontario. Net metering is a simple principle; when you generate electricity, you don’t need the energy your utility would otherwise provide to you. Adding electricity to the grid means you’ll be credited up to the number of kilowatt hours you produce. An easy way to calculate the capacity of the solar system you’ll need is by taking your energy consumption and dividing it by how many hours of sunlight you’ll get throughout the year; Kenora averages about 1247 hours of sunlight, so with 8333 kWh required, you’d need about a 6.6 kW system to provide enough power that the credits would cover your bill.

There’s a concern that sunlight doesn’t last for the same amount of time throughout the year, and new owners of solar energy might worry that this means they’ll still have to pay for electricity during the winter months where energy consumption is at its peak. Fortunately, you are credited in surplus for any electricity generated that goes beyond the amount you used; this means that in the summer months if you’re generating but not using electricity, you can use the credits earned to pay for your winter usage!

Businesses can also receive a rebate by switching to solar; the Government of Canada will allow you to claim solar upgrades to your building as a capital cost deduction at 30-50% of the rate paid for installing the project. This is a huge incentive for businesses, who can avoid being beholden to the rapidly inflating electricity rates of Ontario while recouping the costs paid for the upgrade.

Solar energy is better for the environment, and it’s better for residents of Kenora. Being held hostage to rapidly fluctuating electric rates isn’t just annoying; it can throw your budgeting out of balance and make it difficult to plan your energy usage. Residential, commercial, it doesn’t matter; the Canadian Solar Industries Association found that over 80% of respondents wanted more renewable energy in Ontario, and it’s easy to see why. Solar is the future of Kenora; join us.

Residential and commercial roof solar panels have been popular in southern states for over a decade, but up until recently the technology wasn’t available to create solar panels that were efficient enough to produce a payoff in northern locations. Over the last 5 years however, solar panels have become more efficient and have decreased in price by over 80% making them a viable and economical solution for Kenora and north-western Ontario residents.