Back to Blog
Mar 03
By Powertec Solar 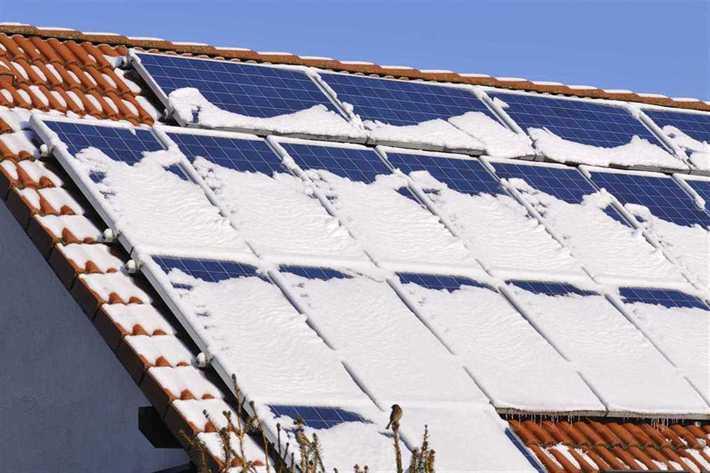 When talking about solar panels, one of the most common concerns you’ll hear is something like: “I heard solar panels don’t work in the winter!”. That’s a common myth and it’s an important one to dismiss – both in Canada at large and more specifically in colder regions like Nunavut. Let’s start by addressing what’s true about the concern. In the wintertime, there’s less sunlight, and less sunlight means less energy from your solar panels. You can make up for this quite a bit with a system called net metering, which we’ve discussed at length in other posts. With that out of the way, let’s look at the common misconceptions about solar panels in the winter.

The first of these misconceptions is that the snow will block solar panels, stopping them from producing any electricity. Fortunately, that’s not the case. Light snow will most often fall or melt off of your solar panels. That’s actually an advantage because it helps clean off dust and debris. What about light snow that doesn’t fall off of the panels? Not to worry! A light dusting of snow covering the panels won’t affect how much electricity you generate at all because the light scatters off the snow and hits the panels. The only time snow might cause problems is when you get particularly heavy snowfall. The panels will most often be tilted, so the snow shouldn’t accumulate too heavily, but if it does, it’s easy enough to brush off. As long as some of the solar panel is exposed, you’re generating power, so a quick clean should be sufficient.

The Cold Never Bothered Me Anyway

Another misconception is that when it gets too cold, your solar panels will stop working. That might be true at extremely cold temperatures – we’re talking heat death of the universe cold – but it’s not true in winter weather, even in Nunavut! In fact, solar panels actually generate energy more efficiently in the cold. Here’s a simple model of how solar panels work: there are electrons in the panel at rest that become excited by the energy from the sun. The bigger the difference between their rest states and their excited states, the more electricity that is generated. When electrons are warm, they have a higher resting energy than when they’re cold –  this means that colder electrons have more potential energy, and are more efficient.

Want to learn more about solar panels in cold weather? We have a couple of resources for you! The first, on the impact of snow on solar panels, was published by the US Department of Energy. The second, on how solar panels generate electricity in the cold, is an answer from the University of California in Santa Barbara.

Here at Powertec Solar, we offer solar solutions for Nunavut. The region is well-primed for solar power as a supplement to the current system of diesel generation, and the government is offering a number of excellent subsidies these days.