Back to Blog
Sep 15
By Powertec Solar 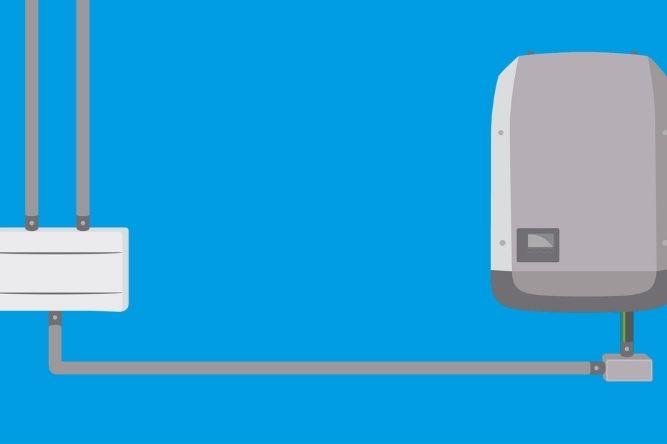 If you’re going to install solar panels on your home, you’ll also need a solar inverter. This piece of equipment makes it possible to convert your direct current energy (DC) to alternating current energy (AC). In turn, this enables your home to utilize the energy produced by the panels that are mounted on the roof. There are two main types of solar inverters that you may encounter: String inverters and micro-inverters.

What is the difference between these two types of systems? Learn more about how to choose the right solar inverter for your next major home project here!

What Is a String Inverter?

String inverters, also referred to as central inverters, are ideal for roofs that face the south and have little to no shade. They consist of a single box located near the main service panel or electric meter. On most systems, homeowners will have only one string inverter though larger systems may require two.

This method works as part of a series circuit where up to 12 panels are a part of a series string. There are inputs for these strings of panels to be run specifically to your string inverter. This is where it gets its name.

Why would a homeowner choose to go with a string inverter over a micro-inverter? Plenty of benefits abound for this type of solar inverter, from problem-solving to cost.

The primary reason that homeowners choose this method is because they are relatively easy to troubleshoot if problems arise with your system. If you’re going to experience something going amiss with your system, the inverter is usually the culprit. Because you only have one or two string inverters, it is easier to narrow down where the problem actually lies.

Many people are put off by the initial investment in solar panels and inverters. It is easier to install a string inverter and requires less time for the technician who is working on your home. Fewer labour hours result in a decreased cost. Not to mention, string inverters are generally less expensive than micro-inverters.

While there are many benefits to choosing this type of system, there are some drawbacks as well. First and foremost, it may not be as effective if your home is in partial shade for part of the day. When one panel is affected by a lack of sun, the whole series of panels will be affected the same way. This is not the case with micro-inverters.

String inverters also don’t last as long as micro-inverters. Most are only going to be covered by a warranty of between eight and twelve years.

What Is a Micro-Inverter?

Micro-inverters are also known for converting your DC energy to AC so that you can use solar energy to power your home. However, there is a big difference between string inverters and these micro-inverters. Instead of having just one unit for a series of panels, each individual panel will have its own micro-inverter installed beneath it.

There is usually an equal number of solar panels and micro-inverters throughout a system. In some installations, you will find that micro-inverters can be paired with two to four panels, but this is less common than one micro-inverter per panel.

Advantages of a micro-inverter

The advantages of a micro-inverter are many, but the main reason for choosing this type of solar inverter is that it can produce more electricity.

Unlike string converters that are limited to the energy production of the lowest-producing panel, micro-inverters allow for the full potential of each panel to shine. This means that even if your home is in partial shade for a few hours a day, the panels that are still exposed to the sun can continue to produce the desired effects.

Micro-inverters have a much longer lifespan than string inverters. While they may be expensive to install upfront, they usually come with a 25-year warranty.

Disadvantages of a micro-inverter

Of course, things aren’t all positive for micro-inverters. They are typically more expensive than a standard string inverter, so you’ll need to budget accordingly for your initial investment in solar power.

Maintenance is another area where micro-inverters don’t win in this debate. It takes a bit of effort to determine which of your micro-inverters is causing the problem. Your technician will have to climb up on the roof, manage your racking system, and replace the micro-inverter that is problematic to restore your system to full capacity. This is much more challenging than putting in a new string inverter on the side of the house.

Keep in mind that you’ll also have more equipment on your roof if you choose to go with a micro-inverter system. It will be more hardware mounted to your racking system, which can be an expensive fix if you live in an area prone to many storms.

Should You Go with String Inverters or Micro-Inverters?

The truth is that there is no one-size-fits-all solution when it comes to your solar system. Both string inverters and micro-inverters offer a wide array of benefits for homeowners, but they have their unique disadvantages as well. You will have to weigh which one will be better suited to your home.

If you need help deciding which solar inverter is right for your home, trust the experts at Powertec Solar. We have the experience necessary to help you figure out which inverter is the best option for your Winnipeg solar panels. Contact us today to learn more about how we can guide you through the process of selecting the perfect system for your home!